Today I continue with my trilogy on Public-Private Sector Partnerships (PPPs) that I began with my posts entitled “Who pays for and who finances our infrastructures?” and the second part “What are the pros and cons of Public-Private Sector Partnerships (PPPs)?” Here I will focus on the importance of the ideology in place to decide whether a public, private or mixed financing and management model should be chosen over another.

I will base my findings on a research project I was involved in a few years back that dealt with modern metropolitan railways and tramways.  In Spain there have been important performances of light rail.Numerous cities had already begun to contemplate the implantation of the modern tramway (Light Rail Network) and others had projected their development, only for plans to be scuppered by the credit crunch. The implantation of this means of transport has been undertaken through the use of public sector financing and management models (investment and operation on the part of the corresponding Public Sector Administration), others with the use of PPP style tenders for construction and development, referred to using the acronym BOT (Build, Operate and Transfer) and finally others with a mixed company with representatives from the public and private sectors. Yet, this decision does not appear to have been made based on technical criteria such as the Public Sector Comparator in which the aim lies in seeing whether the greatest value for money offered on investment, as we talked about in the last post on PPP, is produced from public sector models or those which involve private sector participation.

The question being asked is: Has this been done in accordance with criteria based on political ideology? As I have mentioned previously, I base my argument on research undertaken several years ago dealing with the analysis of case studies to verify whether or not there is a clear relationship between political ideology and financing and management models chosen for the development of the light rail network. We have shown that political ideology has nothing to with results. Milestone passed. For this analysis we studied 17 examples of Spanish light rail networks (or modern tramways), all of which were operational at the time some of those under construction still provided enough information regarding the financing and management model to be able to include them in the study. Specifically, the study evaluated light rail networks in the cities of Alicante, Arganda del Rey, Bilbao, Boadilla del Monte – Pozuelo de Alarcón, Bahía de Cádiz, Granada, Malaga, Parla, Palma de Majorca, Pinar de Chamartín – Las Tablas, Santa Cruz de Tenerife, Seville, Tram Baix, Tram Bessos, Valencia, Velez Malaga and Vitoria. 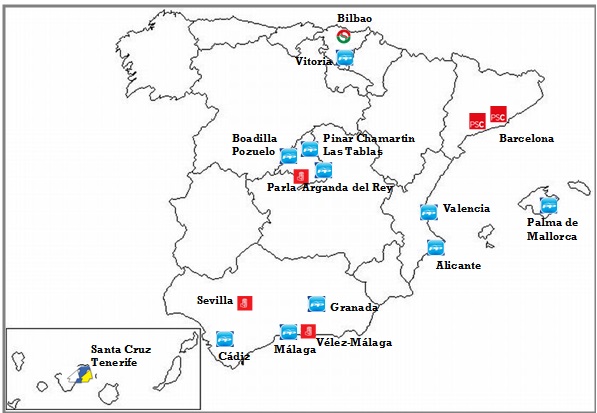 When looking at the parties in government, we can verify that the PP (Popular Party – Conservatives) was the political party that initiated the majority of this type of infrastructure, with a total of 59%, followed by the Socialists PSOE with 18% and the Catalonian Socialists PSC with 12%, finally parties from the Canary Islands and the Basque Country. Neither the right swing towards the private sector or the left towards the public in the development of transport infrastructures such as light rail networks.The BOT method, in other words, PPP concessions for construction and operation is the most commonplace with this being chosen 53% of the time, as part of this type of concession it is worth highlighting the fact that 35% of these were performed using private equity, with the rest comprised of BOT systems with a public sector partner, reaching 18% of the total. The public sector model is preferred in 35% of the cases and the operational tender is the least popular system at just 12% of the case, though it must be said that its acceptance is growing. To sum up, private management is the most commonly used, with 47% of the total, followed by public sector management with 35% and finally mixed management standing at 18%.

Which party was in power at the time of the putting into service of the light rail network? Data points towards the Popular Party, with their conservative tendencies, as tending more towards public sector management, with 50% (especially in the Community of Valencia), whereas the model used by the Socialists, PSOE, above all in Andalusia, was always that of private sector management, with exactly the same scenario with the Catalonian Socialists. Data obtained from the Canary Islands and Basque Country can be discarded as each one only has one light rail network. 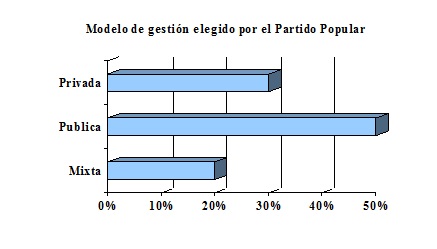 Through a historical analysis, it can be observed that the initial tendency for financing and management models was the public sector model, although from 2004 onwards the private sector model began to take prominence, so much so that it now is the predominant method. This could well be because of the financial constraints of having to avoid a public sector deficit or equally due to the Concessions Act of 2004 which fostered this method of private sector participation.

An interesting data based on these results is the elevated number of light rail networks inaugurated in 2007, just in time for the regional elections. 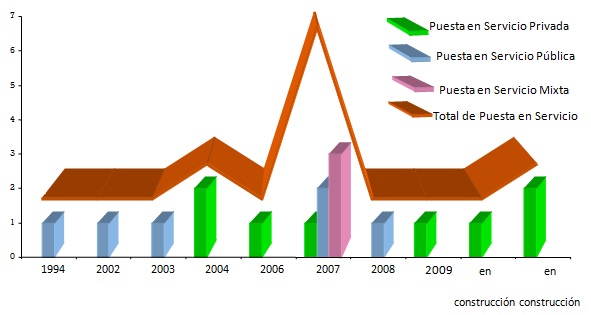 Figure 5: Service Start Up of Light Rail Networks by Year

Given that we verified that ideology did not condition the financing and management models, we studied the possibility of whether the management model in place for other modes of urban transport in the municipality, specifically the urban bus network, had conditioned the choice of development model for the operation of the light rail network. In this aspect, coincidences were found between both models in the cities under study.

Table 6: Influence of the Management Model for the Urban Bus Network on the development of Light Rail Projects.

Bearing in mind the results obtained we can also confirm that the financing and management model (FMM) used in the Urban Bus Networks did not have a conditioning effect of the FMM choice for the Light Rail Project.

To summarise then, we can reach three conclusions:

1. On the contrary to what one would expect, the data shows that the right-wing, conservative Popular Party backs public sector companies in favour of the private sector and the socialist PSOE favours 100% private sector management in all cases. This would make one think that the financing and management model is not chosen as a result of political ideology but rather as a result of strategic and economic reasons, given that under normal circumstances the right would be expected to back private sector participation and the left to go with the public sector, something which is clearly disproven here.

2. On a political level, it is worth mentioning that parties do use light rail project infrastructures as an electoral weapon, as can be deduced from the inauguration in 2007 (electoral year) of almost half of the light rail networks currently operating.

3. Nor does there seem to be a relationship between the management models for the urban bus networks and the model chosen for light rail networks.  What seems clear is that following the introduction of the Concessions Act in 2003 provided an extremely interesting regulatory framework for the development of Public – Private Sector Partnerships (PPP) allowing for a growing level of private sector participation.

All that is left now is to await your views on this controversial topic.